Finnish elections fun: your free lunch on Saturday, and please vote on Sunday

Tomorrow, don’t forget to vote for your local election… But today the candidates may offer you free meals in your municipality, if you find the place where political parties have their booths.

Even in Helsinki, every party is present. Here are some of the booths visited this week near Kamppi: 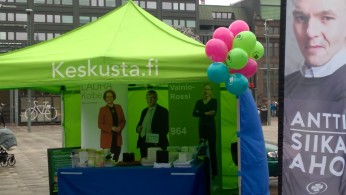 Here is the booth from Keskusta, the Centre Party of Prime Minister Sipilä. As Keskusta is not so present in Helsinki, being a rural party, which explains a lot about the SOTE reform and its 15 regions, they were not able to man the booth. Nice photos, balloons and a lot of advertising for candidates. 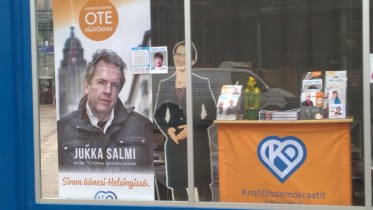 The Christian Democrats, KD, a small conservative miniparty was not either very present, it was lunchtime.  No interesting stuff there, but good look for the candidate Jukka Salmi on the poster. He is good at communication, active in the Salvation Army and leads an excellent and well financed campaign. 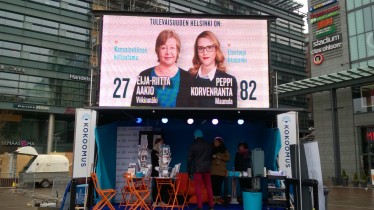 Kokoomus, or the National Coalition Party, the conservatives party of President Niinistö and of Petteri Orpo, Minister of Finances benefited from a large screen presenting pictures of the candidates. Pictures seem to play an important role in  Finland’s politics, you can find the photos of the candidates everywhere in the country these days 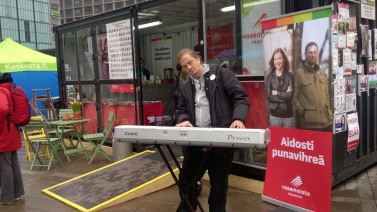 The booth of the Left Alliance, Vasemmisto in Finnish, was a lot more fun, with some people and a musician who was creating a nice atmosphere. Good discussions with real people there, but no screens. 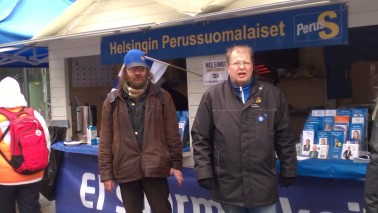 The Finns’ Party, Perussuomalaiset, a populist party in the government, was also physically present and active, distributing coffee, literature and argumentation. They are not really so popular in Helsinki these days, except for Jussi Halla-aho, who plans to replace their leader Timo Soini next Summer. Only problem: Finland’s Supreme Court found Halla-aho guilty of both disturbing religious worship and of ethnic agitation in 2012 and he was condemned. It would look bad for the party to have him as a leader. 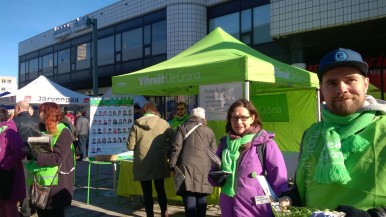 Then today we went to get our breakfast in Järvenpää, 35 km North of Helsinki, where there is usually a nice market. There was a alley for political parties,  full of people, candidates and citizens interested in politics and in getting a free breakfast. We were enjoying pancakes and coffee from the Greens, who have been in the last years the growing party in Finland. 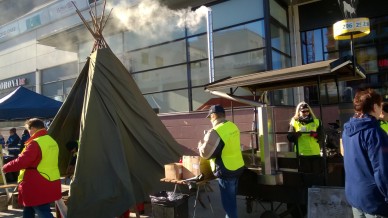 As in many Finnish towns, there was a local party, Järvenpää Plus,  composed of citizens wanting to improve their town. They had a nice equipment similar to what you have in the army to prepare food, but clearly they were getting up late and were not ready to deliver breakfast. Sorry for it, a breakfast in their tent with a fire to grill sausages would have been nice… 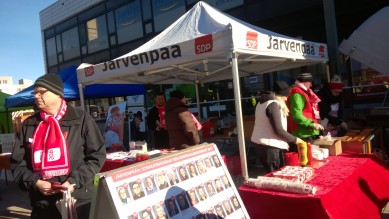 Social democrats (SDP) were also present, distributing Easter chocolate eggs and delicacies plus the usual coffee. Candidates were around answering questions and sharing their breakfast with citizens, worried about the last poll which does not put them anymore in the leading position. They are the ones having more immigrants candidate in the region.

After this breakfast, we went to do some shopping and visits, and came back to Tuusula where we visited the election village for lunch, with apparently hundreds of other citizens interested in politics and possibly more in free food. Kokoomus was offering salmon soup, the greens lentils soup, SDP Pea soup and a 1000 euros lotery, Keskusta and Perusuomalaset grilled sausages (could be the sign of a solid alliance), and all were distributing chocolate eggs and cakes together with a lot of different small items used by candidates to differentiate themselves. You can have a look below at a collection of things we have gathered there… 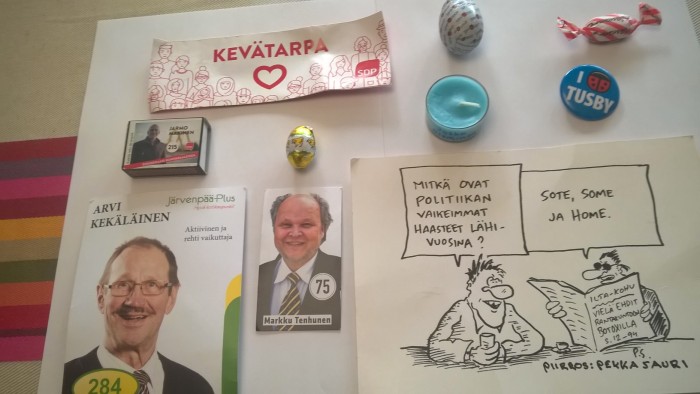 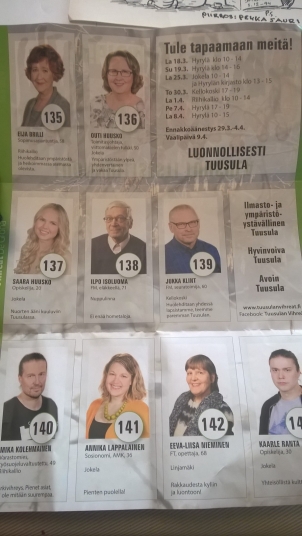 I should be fair: there were serious items useful for the election , such as lists of candidates and information about them, as you can see on the left. If you vote tomorrow, you should know that you have to pick a candidate (among generally some hundreds), get her or his number, and that you will have to choose this number when you are voting, which is quite different from the practice in other countries. Again, Finland is quite democratic.

This was quite an interesting Sunday, I will follow the results with interest tomorrow

Like Loading...
‹ Ville Niinistö (Greens) about the campaign and his future
Most important government project: three more ministers to avoid Timo Soini’s unemployment ›