Home › Economy › Anne Berner, Centre Party candidate: in the 21st century, no strong reform without the support of the civil society

Anne Berner, Centre Party candidate: in the 21st century, no strong reform without the support of the civil society 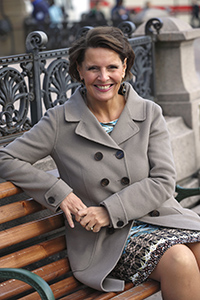 Anne Berner is very well-known in Finland as a successful businesswoman, in particular as CEO of Vallila Interior and her other activities as board member of a number of big companies . But she has a particular place in the heart of Helsinki citizens because she has been chairing the support fundation for a new paedriatric hospital in Helsinki, and has fulfilled her goal of raising at least 30 million euros in a year and a half, when it was expected that it would happened within five years. This may be happening quite frequently in other parts of the world, but was quite unusual for Finland. She has explained to Finland Politics what she wants to achieve by going into politics, and talked about her campaign.

You have been very successful in the world of economics. Why are you going into politics?

I have been always, besides an entrepreneur, in the past ten or fifteen years, very active in advocacy. I have always felt compelled in a certain way to be a part of society. I think, as an entrepreneur, it’s almost a duty, because we have the possibility to take a stand, to have an opinion, to take a position in societal questions, which publicly listed companies or people who are hired to work for companies have much more difficulties in doing.
So I have always encouraged entrepreneurs to be active in society. This is an extreme step, but on the other side, having been ten, fifteen years in advocacy and seeing that almost nothing has changed, you know, you have been working and influencing people, making proposals and co-writing papers and so on and at the end, very little has changed. So I need to change my angle and I want be active in a different way, through politics.

And for me, being active is who I am. It’s also very typical that I then want to see if I can do it myself, to take the challenge. Can I actually take the responsibility that’s given to me, and put myself on the line and actually do it, instead of shouting from the bushes, “Do this, do that?” which I never felt that’s the right way? Yes, I have to do it.

I think that the first starting point is leadership, we need a different kind of leadership. I think people who are used to making decisions can actually be a part of making a difference in the political culture of making decisions. We have had now a culture which basically has been pushing things forward, but hoping that they maybe disappear, instead of analyzing them to the far end. And the present leadership is producing a lot of documents and reports, as we have seen in the last years, when thinking and acting would be necessary. We have had some fantastic reports on Finland, on how to get direct investments, on capital markets, on how to promote our exports. There, actually some things have been done. But on the others? Absolutely nothing.

In every report, it basically always starts with “you have to express your will to make a change”. And that hasn’t been the case. I think that’s one point, expressing a strong will on what we want to achieve. Then the second point for me is supporting entrepreneurship, and of course taxation is there a big thing.

The last point, and an important one in which I believe strongly is that, in order to make strong reforms, you have to have a support in the public, which means a society which has a strong civil activity. That, at the moment, we don’t really have. Our third sector is very weak, and we are missing a mission there. From my work with the children’s hospital, I can see that, when you get the mission and when you have a purpose, you can actually change the way things are done. And I don’t mean the fundraising and I don’t mean the financial structure, but I mean having volunteer people involved and keep the objective in mind. When you have that, you can develop new ways of creating decisions. I think that the way we have built the children’s hospital project will make a serious difference on how the children are treated at the hospital. That’s the important thing, not the financial structure.

In a society like ours, which is so transparent through social media, through everything else, political decision makers will probably never, ever again be in a position where you actually can make strong reforms with only the political decision making. I think, for big reforms, you will need the civil society as a support.

For small companies, there are basically three things which I think are important. Of course, for small and medium-sized companies in general, just less red tape. I think that the companies have difficulties in competing because of such heavy bureaucratic loads.

The other thing is taxation. We need a taxation which supports access to equity. There are several instruments for that, but I think we need to agree on the basic idea that small or medium-sized companies need access to equity. In order to get access to equity, we cannot have a heavy taxation on equity, which we have at the moment.

Then, the third thing is the terms of employment. Our laws for protecting the employees are from the 1970s, where there was a big difference between the educational standards of the employer and the employee. Today, our employees are well educated anywhere. They know what they want, they know what they do, they know what they can do, and they’re able to discuss and negotiate on their own terms. I think that small and medium-sized companies need to be able to have a dialogue with their people, in order to build the future of the company. The other element is that for certain small and medium-sized companies, we have a huge fight for the best talent, and we need to be able to pay more. And in sectors where there is no much competition, we should not have high salaries, as it hampers Finland’s growth capacity.

Then you have, of course, the big problem of the protection of employment, which means that if you are a small and medium-sized company, and you hired the wrong people, or you need a new kind of competence, you are in trouble. Yes, we are very flexible in that way that we can undo employment if we are doing badly. But we are in a very difficult position if we are doing well. There’s almost then no possibility to change talent. That means that our growth is limited, because if we need a different kind of know-how or competence, or if we see that our competition goes into digital ways of doing things, and we don’t have the digital talent, we cannot really employ new people unless the other people that we already have are retiring or something. That’s really difficult, and I think there we need – there, we really need to change it.

After your success with the Children’s Hospital, what is your feeling about the health system in Finland, and the kind of reforms it needs?

First, we need to agree on what we agree, and then we need to understand on what we do disagree to solve these differences. For example, I think we can agree on that the health system needs to be reformed in a way that you always have the client first. If we are ready to think that everything that we do should come from a customer perspective, and if we are willing to pay our services based on the market price, then I think we will quite easily build a healthy system.

It is your first political campaign. How is it going? Have you some surprises?

I love to meet people, and I love to discuss with people. I have done that also with a lot of meetings for the children’s hospital, in the past two and a half years. I have met thousands of people, and that’s something which I like about campaigning, talking with people, hearing their experiences and their feelings.

It is the same as when you are looking for a new job: a campaign being basically a long job interview, which means that you need to understand your clientele, and understand what the people are looking for. I have always felt it strange that, in the political culture, you are expected to first tell your decisions, and then to listen. I hope that the campaign allows you to listen first, and then to form your opinion more clearly. Of course, you have a personal opinion about political topics, but to actually prepare

Like Loading...
‹ Pekka Haavisto about the Greens’ campaign, the international situation, and a possible participation in the coming coalition
Juhana Vartiainen, about his move as a candidate for the National Coalition Party: in the Nordic countries, the political right has accepted the social democratic welfare state ›